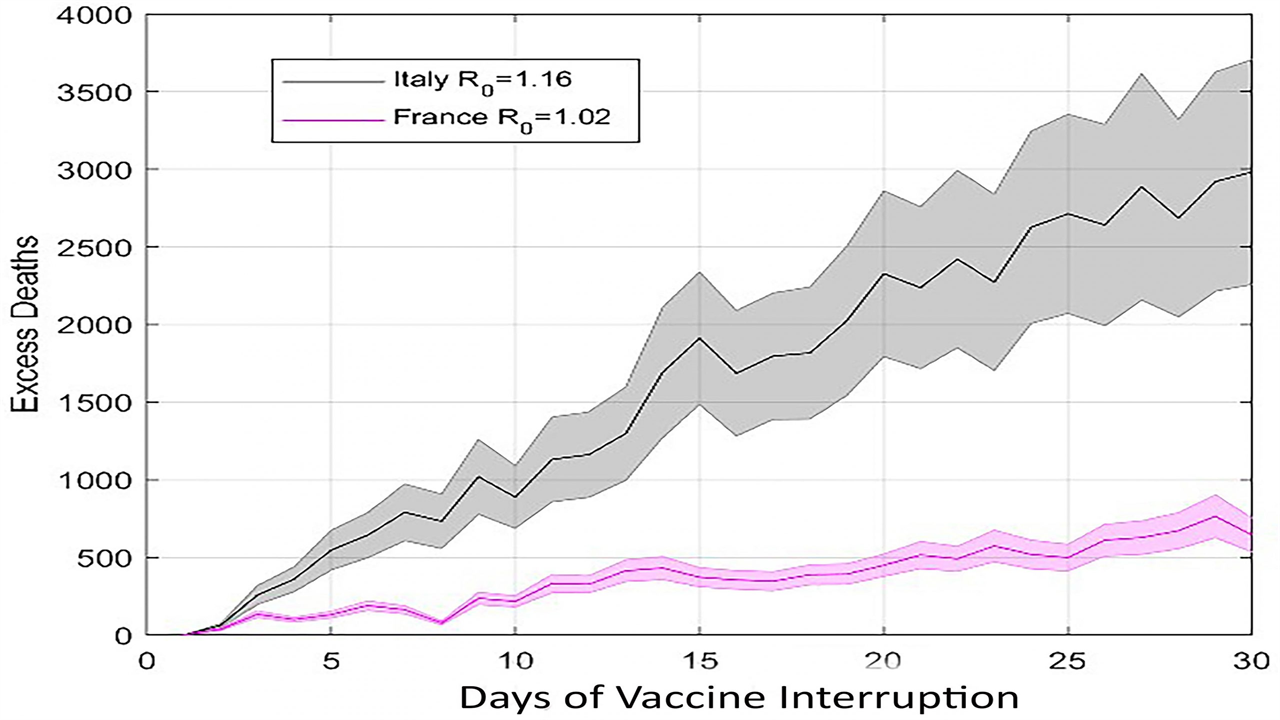 Evolution of excess mortality due to AstraZeneca vaccine interruption as a function of the number of days interruption. Credit: Davide Faranda, Tommaso Alberti, Maxence Arutkin, Valerio Lembo, and Valerio Lucarini

By interrupting AstraZeneca vaccinations because of suspected links to deadly blood clots, COVID-19 can continue to spread and cause more deaths.

The AstraZeneca COVID-19 vaccine is suspected to be linked to a small number of deep vein thrombosis (DVT) cases, which recently surfaced in Europe when millions of people received vaccinations. This prompted several countries to suspend AstraZeneca injections and investigate causal links with DVT.

Researchers in Europe teamed up to explore a hypothesis that interrupting AstraZeneca vaccinations, even for a short duration, could cause additional deaths due to the more rapid spread of COVID-19 within a population of susceptible individuals.

In Chaos, from AIP Publishing, researchers report using an epidemiologically susceptible-exposed-infected-recovered (SEIR) model and statistical analysis of publicly available data to estimate excess deaths from AstraZeneca vaccination suspension and possibly related to DVT side effects in France and Italy.

They concluded that the benefits of using the AstraZeneca vaccine far outweigh the associated risks, and that the relative benefits are greater in situations where the reproductive rate is higher.

“Despite its simplicity, the model is able to dissipate uncertainties by adding interactivity as a source of randomness in the data,” said Davide Faranda of Laboratoire des Sciences du Climat et de l’Environnement and the London Mathematical Laboratory. “It mimics our ignorance of the model’s exact parameters due to testing capabilities and evolving political and medical protocols.”

The benefit-risk analysis is performed using a methodology inspired by the Fermi estimates. The group compares the additional deaths due to temporary restriction of AstraZeneca vaccine use and the additional deaths due to the potential side effects. Given the many uncertainties about potential side effects of the vaccine, they resorted to making worst-case scenario calculations to provide a robust upper bound on the associated excess mortality rate.

“Our work shows that suspending AstraZeneca vaccinations in France and Italy for three days without replacing it with another vaccine resulted in approximately 260 and 130 additional deaths, respectively,” Faranda said. “The difference between the number of deaths in the two countries is due to their different epidemiological situations and in particular to the higher base reproduction number R0 measured in Italy versus France on March 15, 2021.”

The group analyzed the case of resumption of vaccinations at a doubled rate for the same number of days as the vaccination interruption.

“The excessive deaths are still of the same magnitude as those observed by resuming vaccinations at the same rate as before the hiatus, but reduced by a factor of two,” said Faranda. “This is a clear result of non-linear effects of epidemiological dynamics. Those who have not been vaccinated can infect other people before the vaccination is resumed. “

Even if several countries have resumed or are on the verge of resuming AstraZeneca vaccinations, the researchers show that the effect of the interruption is difficult to compensate and that the use of vaccines must be doubled. For large countries where AstraZeneca vaccinations have resumed, confidence in vaccines has decreased by a significant percentage.

“The analysis presented here was performed with a sparse but well-posed and tested model, and we hope that our results will be the starting point for more detailed, sophisticated and mature research with advanced modeling and data collection exercises,” said Faranda.

First evidence of the validity of their estimates is the report of seven DVT deaths per 18 million vaccinations in the UK, a value consistent with the group’s work based on data available a few weeks ago and assuming a standard mortality rate of DVT. of AstraZeneca vaccinations.